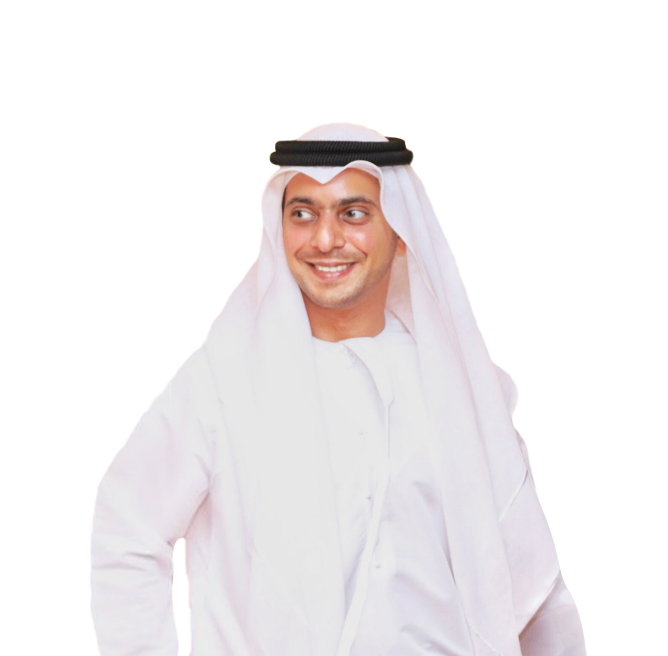 His father, H.E Mohamed Khalifa Bin Yousef Al Suwaidi, is a Diplomat and former Advisor to Sheikh Khalifa Bin Zayed Bin Sultan Al Nahyan, the President of the United Arab Emirates. He is also the founder of Bin Yousef Group – a holding group active in multiple sectors including financial investments, asset management, real estate, shipping, travel, and entertainment. He is the second child to Khalifa Bin Yousef Al Suwaidi, a statesman who played a significant role in the creation of The United Arab Emirates and in the economic and political development at the time in Abu Dhabi.

His Mother, Mouza Bint Ahmed Bin Khalifa Al Suwaidi, is the eldest child to H.E Ahmed Khalifa Al Suwaidi, the Personal Representative of the UAE President, who was the first to read the historic statement of the founding of the United Arab Emirates on December 2, 1971 and the first UAE Foreign Minister for several years until he was appointed to his current post.

Dr. Al Suwaidi attended Al Nahda National High School in Abu Dhabi. He subsequently attended Wycliffe College in Gloucestershire, UK, where he achieved his A-levels. Thereafter, he graduated in 2004 from Regents University, London, with a dual degree (BBA) in International Business and a BSc (Hons) in Business Administration. He also earned a Post Graduate Diploma in Finance & Banking and an MSc in Strategic Business from the University of Portsmouth, UK. In 2014, he completed his PhD in Economics & Finance from the University of Portsmouth with research titled “Stated Preferences for Future Management Developments in the Hospitality Sector, A Case Study of The Emirate of Abu Dhabi, UAE”.

Dr. Al Suwaidi began his career in September 2004 with The National Bank of Abu Dhabi (NBAD) where he honed his experience for thirteen years. He lastly occupied his position as the Regional CEO Middle East & Africa as the bank’s chief representative in the region and actively contributed to the merger and integration between National Bank of Abu Dhabi and the First Gulf Bank into First Abu Dhabi Bank, FAB, now known as the largest bank in the Middle East and North Africa.

Dr. Al Suwaidi manages a portfolio of self and family asset management in real estate and financial investments in addition to Household operations.

In 2010, he was appointed as Vice Chairman and Managing Director of Bin Yousef Group which is founded and fully owned by his father, H.E Mohamed Khalifa Bin Yousef Al Suwaidi, a holding group active in multiple sectors including financial investments, asset management, real estate, shipping, travel and entertainment. 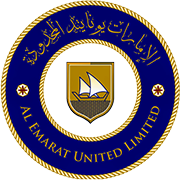 With strong family roots in trading, business, and state policy, Dr. Al Suwaidi carried forward the task of growing the family brand with connections across borders particularly between the UAE and the UK. In 2014, he started and chaired Portsmouth Limited Abu Dhabi, with UK representation. It is a general trading firm promoting local and foreign investors in the region with several associations across borders. The establishment of Portsmouth Limited (now known as Al Emarat United Limited) was derived from Dr Al Suwaidi’s strong international professional network in various industries and markets and potential negotiation and international relations skills. His mission has been to combine all of these elements to continue the family’s brand and legacy, one that started from the late Khalifa Bin Yousef Al Suwaidi, to rise up to the challenges of the 21st century. The company’s name reflects his belief in the strength of the family’s trading roots in the ports of the Gulf.

Dr Al Suwaidi’s passion to his culture and his country has encouraged him to further promote the Emirate of Abu Dhabi as a powerful brand in its tourism and culture at a national and international level.

He has greatly contributed in strengthening the joint relation between the UK and the UAE and is one of the initial founders of the UK-UAE Year of Culture which was announced in November 2016 by His Highness Sheikh Mohamed Bin Zayed Al Nahyan, Crown Prince and Deputy Supreme Commander of the UAE Armed Forces, and HRH Prince Charles, The Prince of Wales - The Patron of UK-UAE Year of Culture. 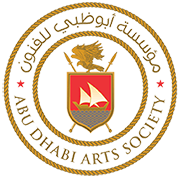 In 2019, he founded The Abu Dhabi Arts Society, ADAS, under the influence of his upbringing in an environment full of thought and creativity and was natural to appreciate the arts. Encompassing visual arts, poetry, and music, ADAS aims to shed light on traditional and emerging artists from the region and bring together a community of artists, collectors, scholars, and enthusiasts for private events and social gatherings.

Under ADAS, Dr. Al Suwaidi created the first-ever Emirati tartan which was designed by himself and and Ken MacDonald. The AlSuwaidi tartan is made up of the traditional Pan-Arab colours that form the UAE's flag. Along with the tartan, the Abu Dhabi tie was specifically designed by Dr. Al Suwaidi carrying the emblem of the Emirate of Abu Dhabi. The custom made patriotic necktie reflects an authentic image of Abu Dhabi. The tie is manufactured by Benson & Clegg one of the oldest silk weavers in England. The tie is one of the personally manufactured collection which also includes cufflinks and lapel pin.

Over the years, he has been an active member of several projects that aim to give back to the community by supporting young leaders, local artists and collaborating with nonprofit organisations in the UAE and the UK such as Make a Wish Foundation, The Prince’s Trust, the Gifford Wood Appeal, Lombard Appeal, the Commemorations of Waterloo Battle 200th Anniversary, the 90th Anniversary of The Kate Kennedy Procession of St. Andrew’s University, the Scottish Tartan Association and most recently Al Faraj Fund. 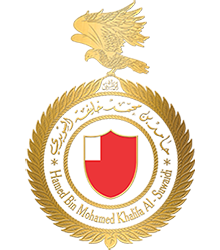 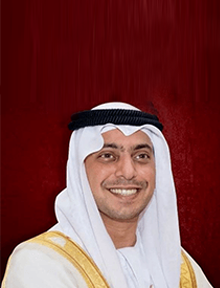 “Arts and culture have an important role to play in shaping individuals and societies. Nurturing promising young artistic talents and providing them with platforms for creative expression is crucial to encouraging unique approaches to art-making and inspiring more young people to take up arts as a profession.”


“I was influenced by my upbringing in an environment full of thought and creativity and it was natural to appreciate the arts. We are also educated to open up to and benefit from different cultures of the world without forgetting our heritage and our original culture.”


“We seek to provide the opportunity to see the painting for art lovers of different categories and ages of all nationalities in the country. Therefore, we aspire to organize a tour to display the Mary Magdalene painting in all the Emirates in cooperation with different institutions and destinations with its artistic and material worth.”


“Such initiatives aim to build bridges of communication between communities through international plastic art, highlighting Renaissance art and participating in the revitalization of the arts movement in the region, in order to contribute to raising the level of culture in the Arab world.”


"This initiative is part of Abu Dhabi’s endeavor to communicate important messages about our rich culture, values and identity through the medium of art. Our aim is to reach the world and to boost the prospects of art and culture. This initiative is also aligned with our main mission to promote Abu Dhabi’s image, not only as a leading city worldwide, but also a culturally vibrant city that encourages tolerance and coexistence."

One of Dr. Al Suwaidi’s greatest initiatives has led him to found The Abu Dhabi Arts Society. Encompassing visual arts, poetry, and music, ADAS aims to shine a light on traditional and emerging artists from the region and bring together a community of artists, collectors, scholars, and enthusiasts for private events, social gatherings, and openings. As chairman of the Abu Dhabi Arts Foundation, Dr. Al Suwaidi was influenced by his upbringing in an environment full of thought and creativity and was natural to appreciate the arts. 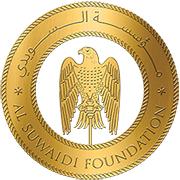 The Al Suwaidi Foundation was founded by Dr. Hamed bin Mohamed Khalifa Al Suwaidi, in 2019 to manage the enduring legacies of the late family members and to undertake projects designed to preserve the cultural and artistic heritage of the United Arab Emirates.

Unless otherwise indicated, the private office to Dr. Hamed Al Suwaidi is the owner of all intellectual property rights used on the website and the material published on it. Material may not be downloaded or used for any commercial or promotional purpose without an explicit written communication from The Private Office.

The information on this website does not necessarily reflect our views and opinions, and any material posted or displayed on the site is not intended to amount to advice on which reliance should be placed.

You are responsible for checking the accuracy of relevant facts, instructions, suggestions and/or opinions given on this website before relying on or entering into any commitment based upon them. We disclaim all liability and responsibility arising from any reliance placed on such materials by any visitor to our site, or by anyone who may be informed of any of its contents.

We are committed to the highest standard of quality information and every attempt has been made to present up-to-date and accurate information. However, we give no warranty as to the accuracy or currency of the information on the site.

Access to the site is permitted on a temporary basis, and we reserve the right to withdraw or amend the service we provide on the site without notice (see below). We will not be liable if for any reason the site is unavailable at any time or for any period. We do not warrant that access will be uninterrupted or error free or free from viruses.

Copyright in all photographs on the site belongs to the Private Office unless otherwise stated. None of these photographs may be copied, used or reproduced by any means or in any format (including other websites) without the prior permission of the copyright holder.

Other images and video

Copyright in non-photographic images and video material on the site belongs to various owners and permission to reproduce or use any such image or video material must first be obtained from the Clarence House Press Office.

Linking to the site

You may link to any part of the site, provided you do so in a way that is fair and legal and does not damage our reputation or take advantage of it, but you must not establish a link in such a way as to suggest any form of association, patronage, approval or endorsement where none exists without first obtaining our consent.

We may revise these Terms and Conditions of Use at any time by amending this page. You are expected to check this page each time you use the site to take notice of any changes we have made as they are binding on you.

Thank you for your interest in our digital media pages.

We kindly ask you when engaging with our website and social media pages that you show courtesy, kindness and respect for all members of our communities.

By engaging with our social media channels you agree to follow these guidelines.

We reserve the right to determine, at our discretion, whether contributions to our social media channels breach our guidelines.

We reserve the right to hide or delete comments made on our channels, as well as block users who do not follow these guidelines.

We also reserve the right to send any comments we deem appropriate to law enforcement authorities for investigation as we feel necessary or is required by law.